Pagan wedding must be fun an event to attend. There are so many Pagan beliefs and religions that existed before Christianity and quite a few that arose today.

Things to Know About Pagan Wedding

Its hard to describe the many and different Pagan traditions in one post so it’s going to be more general so as to include the main and similar wedding traditions pertinent to Pagan cultures. 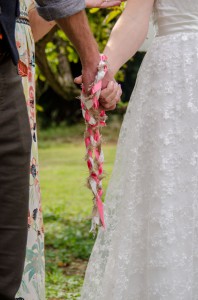 Handfasting is a ritual of binding the couple’s hands with a rope signigying that they are betrothed to each other. It was often used in a wedding ceremony and the engagements. You can incorporate it into your civil ceremony or invite an officiante to your Pagan wedding to sign legal documents along with it.

Vows were considered very important in some cultures so they should be original and personal. Exchanging vows is still widely used today so that won’t be too much different from the traditional wedding.

Before Christianity people had many Gods and Goddesses and some cultures simply worshipped Mother Earth, sun, fire, and other elements. In a Pagan ceremony it’s not uncommon to pray to gods and honor the four elements. Other rituals may include unity candle lighting, broom jumping, and sitting or standing in a circle. The ceremony is usually held outdoors so it’s a great opportunity to take advantage of nice weather and a nearest forest or natural sight you like.