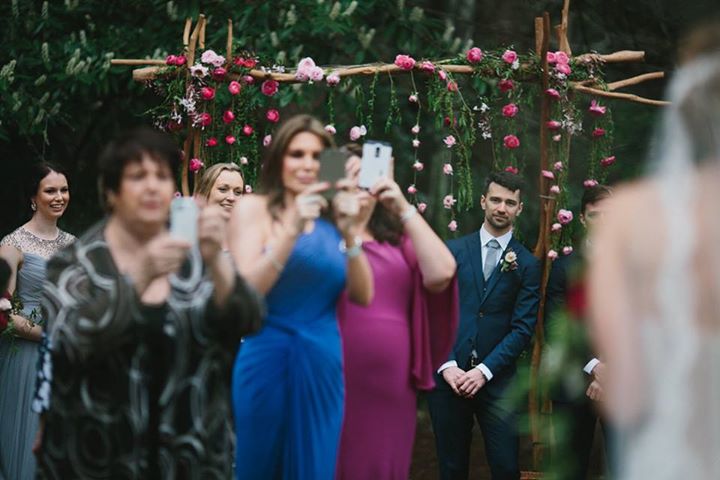 Photographer Thomas Stewart has taken the picture above to show the reality of a modern wedding. It’s full of tech. But no tech code or etiquette. Taking a phone picture, it’s such a NBD thing for us to do nowadays but it clearly makes the wedding photographer’s life (work) so much harder. Just look at this image. It’s all wrong! The guests should look ahead and turn at times to see how far the bride has come. And they are standing with their back to the groom, each taking the same picture with their obviously inferior phone camera.

It’s become hard for people to live in the moment. They either lose it somewhere within their bloated photo album or social media profile or spend hours preparing for just one shot and then poof. It’s just another picture on Instagram. While there’s nothing bad about sharing you have to remember that in a company or at the event, it’s not always about you.

There time and a place for everything. Don’t take a picture during a ceremony. Let this be an intimate moment for your family or friends. Let the professional do the work for you, discreetly and well. Look at the happy faces of the couple and appreciate their emotions at the moment. They are starting a new life together.

Don’t Spend Too Much Time On Your Phone

During a reception don’t stare at your phone all the time, it’s rude. If you don’t want to talk to people and just came there for the ceremony, fine, but if you’re trying to be in two places at the same time, know that you’re failing miserably to be at least at that wedding reception.

Ease Up On Selfies

You put time and effort into dressing up but that doesn’t mean you have to take selfies every couple of minutes. If you have to, do that at home but remember that it’s someone’s very special day and you’re using it as a pretty background for your social media.